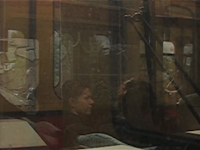 6 Berlin Views are short segments shot aboard Berlin's commuter trains. As a train departs from, transits through and arrives at various stations, the artist focuses his camera on the visual landscape formed on the glass windows of the fast-moving container inside which he stands.

Like most non-glass makers, Sonnenschein's relationship to glass as a material is defined by its presence in everyday objects, frequently mirrors and windows. Consequently, his understanding of the material is shaped by observed phenomena : reflection and transparency. In 6 Berlin Views, he brings together the two seemingly opposite surfaces - a mirror, which is typically opaque and reflects the subject standing across from it, and a clear window, which allows the subject to see through it - onto one projection surface. This is the window of the train.

Using simple documentation of events they unfold, he removes all pretense and deliberation on his part to guide the viewer towards a specific narrative. Instead, like light diffraction patterns, he allows the viewer to go back and forth between the "mirror" and "window" aspects of the projected image. At times, the images are discerned At other times, the images merge in ghostly ways. In a sense, he describes a screen as a combination of moving image and glass, and within that, a repository to hold what lies beyond the materiality of its substance, be it shadow, reflection or scenery.

Typically, studio artists apply images of landscape on vessels through engraving, enameling, layering, sandblasting, cutting, etc. As artists, we are constantly trying to encapsulate or represent what lies beyond the confines of the vessel on its surface. What Sonnenschein does flips that relationship around and changes the scale : He sees himself as being contained within the vessel (the train) as opposed to looking at it. He creates the image onto the object's surface in real-time using the optical qualities of the object itself (the train) as opposed to manipulating the vessel's form by say, cutting into it.

We are, of course, familiar with several devices in the long history of objects - the camera obscura, magic lantern, telescope, microscope, etc - that bring the outside world into a confined space. Usually though, a device accomplishes one thing at a time. A moving train, as Sonnenschein has discovered, indulges various optical activities simultaneously. It is a vantage point, a lens or conduit for light to pass through, a projection or reception screen. Keenly experiencing these aspects during his daily commutes, the commonplace yet unique perspective Sonnenschein adopts in this work presents the train as an object he is contained in as well as a device that captures moving image . In turn, the video exposes a cinematic space that is created by a vessel onto its own walls in an ephemeral marking of passage of time.
Posted by yukanjali at 10:17 AM

yukanjali
yuka + anjali is a curatorial team interested in the latent connections between glass and alternate / new media. Since 2008, we have been working towards exhibition and publication of guerilla interventions in glass practice, and the consequent re-definitions.

The Post-Glass Video Festival, featuring 20 works by various artists, opens at Heller Gallery on Sep 10, 2010.
The exhibition travels thereafter. Seattle, Sydney...
Please contact us with suggestions if you would like to see the show in your area.